‘I remember the day somebody bought one of my designs. I was young at the time so I wasn’t used to having certain amounts in my pocket. I said to my mum, ‘Look!’ and she said, ‘God blessed you with talent, so continue. If it’s God’s plan, you’ll succeed. What you’re doing isn’t random.”

Born in Italy and raised in London, Nnamdi is a visual artist working towards a degree in Computer Science at one of the U.K’s most prestigious Universities – King’s College London. We caught up with him as he shares his story, details regarding his designs, and his aspirations as a visual artist. 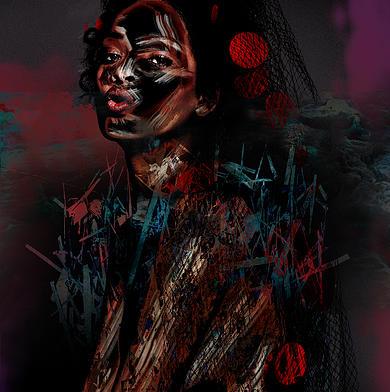 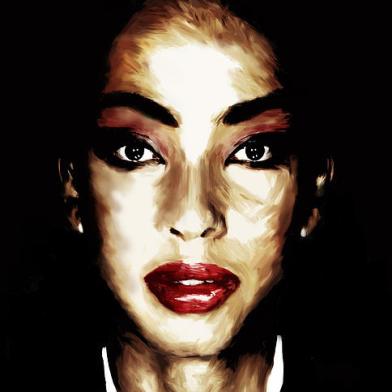 Nnamdi X Sade Art piece produced for Sade the legend.
Nnamdi, could you tell us a bit about your background?

I was born in Italy (hence the name Antonio) and spent most of my teenage years growing up in Hackney, London. I loved hanging out with most of the boys who lived locally which meant there was always a risk that I would get into trouble. Growing up in a rough area where I experienced youth hardship eventually took it’s toll on my parents, especially my mother. As her only son, she was afraid I would get into serious trouble one day. Soon enough, we moved from London to Essex.

We can Imagine settling into a different area must have been difficult. How did that affect you?

Well, I did find it difficult to settle into a new town. I came from an area where a lot of slang was spoken amongst youths and landed in an area where it seemed as though everybody said, ‘Hun’ after almost every sentence. It was very different. I felt like nobody could understand me, and I was scared I would change. Eventually, I met someone I could relate to and we became best friends and still are. Now that I look back, I am thankful for that period of my life as my cousin who lived behind our estate in Hackney is now in prison.

What Inspired the move towards graphic design and being a visual artist?

I took up Art in school at GCSE level which led me to start experimenting more with colours and designs. It all started as a hobby and really manifested at university after I discovered I had a passion for graphic and visual design.

Were your parents supportive of your chosen career path?

*He laughs* – This is a funny one! Initially they were hesitant, but they could see my determination. I researched and presented to them that there are vast amounts of media companies everywhere in London. I was an academic guy and did not have issues cramming information from my ‘normal’ subjects, but I had no passion for them. I managed to convince them in supporting something new, and now everybody is happy because I’m doing well.

A lot of your work such as the experimental piece using Rihanna are very abstract – Where do you find inspiration from?

The truth is, I started that piece on impulse. Actually, I start most of my pieces without a thought as to how I’d like it to look or end up. I normally start experimenting with a picture and gradually add to it as more ideas come into play. I really did not expect that picture to turn out the way it did, but when you add passion into the mix, ideas will come.

What I will say on Inspiration though, is that I went through a faze where I did not want to be recognised as a Nigerian.

Hmm- Nnamdi, what do you mean when you say, ‘I did not want to be recognised as a Nigerian?’

Well I grew up here in the U.K and I knew about some negative stereotypes concerning Nigeria and Nigerians. From what I had seen, it seemed as though most Nigerians did not care about how they were perceived by others – rather, they succombed to the stereotypes of fraud. I was just ashamed to tell people I was part of ‘that country.’

However, after I visited Nigeria I learned so much. I learned that not all Nigerians had the same mentality. I was inspired to see how much people were able to do from the little they had and from their natural talent and abilities, which inspired me to focus on mine. 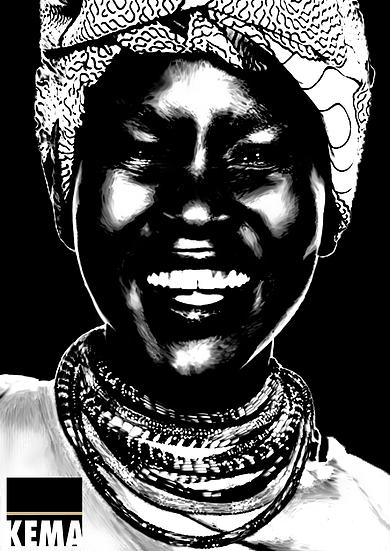 We loved your commissioned work produced for King’s College Ethnic Minority Association (KEMA). Was this a difficult piece to produce?

Thank you! The piece wasn’t difficult to produce. At the time, King’s college ACS Ethnic Minority Association were looking for a graphic artist to design their logo for a cause to bring out the black problems in our society. When I finished the design, I sold two pieces to two students and the money raised went back to cause.

So tell us, what software programmes or tools typically aid in the production of your work?

At the moment, Apple’s Final Cut, Photoshop and a programme called Pain are very useful for my work. I try to vary the software programmes I use, but it is not always easy. Learning how to use each software can be challenging and daunting, but once I get better at using a programme it makes the work so much easier. I’m just glad I was able to save up enough to purchase a macbook pro as I used to be a cheapskate!

Alongside talent, what skills have helped you immensely?

I would say having strong IT skills and the ability to understand and work with programmes. There are a lot of programmes out there to be purchased but if you do not have passion for graphic design, you’ll get tired of learning how to use them. I am also studying towards my degree in Computer Science, so I do pick up some skills and some knowledge from lectures.

What is the best feedback you have received about your work?

I designed a ‘could be’ artwork for Hermes, and a fashion collector got in touch with me thinking it was the real deal! After I made it clear that it wasn’t, he still wanted to purchase my work. I was so ecstatic; Hermes is a well known brand so I took that as big complement and motivation to carry on.

You worked on a re-edit of Justin Timberlake’s ‘Tunnel Vision.’ Do you have a preference for working on still or moving images/videos? How long does each piece take?

Hmm, I don’t really have a favourite medium. I’m really trying to learn and perfect my work with all mediums as I do not want to be restricted. I just learned how to use Final Cut this year using Tunnel Vision as practice, and I discovered that to edit the video  just required vareities of layering in photoshop. I’m glad it came out great as it was and still is all new to me!

Each piece takes a maximum of two weeks to produce, especially for more detailed paintings such as the ‘Sade’ piece. Those require a lot more attention to detail.

I would love to eventually start a creative agency in Nigeria, perhaps dominate the media market in creativity by adding another dimension to the way nigerians view media. Another sector I would like to get into is Advertising. I’d really like to have an advertising agency and learn how to incorporate lighting in my work. Runway shows would be good too in order to produce edgy output. I have so many ideas i know, but I’d definitely venture into Anything creative that is targeting the african market.

Who knows? perhaps I might end up collaborating with some Lagos fashion shows! *he laughs*

We do not see many visual artists in the Nigerian Community. What advice would you give to those looking to form careers in the creative arts sector?

I would say having passion, diligence and talent is very important in order to succeed. Certain opportunities and positive outcomes that have come my way have personally encouraged me to put my trust in God. I would also generally advise to do something that makes you happy. Broaden your horizon and do not confine yourself to a particular area. Step out of the box.

Right Nnamdi, we hope you do not spend all waking hours in the day sitting in front of the computer! What do you get up to in your spare time?

*he laughs* funny you should say that! – I am actually one of ‘those guys’ you see on the trains with their laptops out in the open, working. However, I can assure you that I do have a social life. As I grew up in both Essex and London, I have different circles of friends that I hang out with. We usually go out a lot when we’re all together!

What is the best advice you have received? has that helped you?

The best advice I have received is simple; Trust in God. Prior to getting to where I am today, I had to jump through some challenges so that advise has helped strengthen my faith in God regardless of the circumstances. Second to that, I have also received a timely advice to have the mindset to do things for the right reasons.

Do you have any regrets?

Yes, I really wish I worked harder during my years in 6th Form (college). I Messed around in my 1st yr and received bad grades. I Wish I had discovered my passion at an earlier stage. I could have begun to network with different people to put myself in better position. Thankfully, I’m not doing too bad. Better late than never eh?

Do you have a favourite past-time?

I used to listen to Channel U quite a lot (when it was called channel U). There were a lot of music artists I listened to from there such as Lethal B and Kano, so when I hear certain songs such as ‘Nite-Nite’ from Kano play, it reminds me of my childhood and growing up in Hackney with everyone. Even though the area wasn’t the best, I still played around with the guys and it felt like a community.

Who doesn’t remember Kano?! ‘Nite Nite, Brown Eyes, This is the Girl’ But anyway, what does your music playlist look like?

*Lol, good times. I’m into bit of everything except heavy metal. I have Giggs, some Indie american music, and songs from a band called Wild Nothing. I have quite a lot of afrobeats on my playlist too – Burna Boy wins the top spot for me.

What are your thoughts on Nigeria currently? would you consider moving back?

I think people in the government are too old and stuck in their ways. The only way I see change happening is they make room for young people by creating opportunities for them. At the moment they need to look through things with fresh pair of eyes, then implement positive changes. Relying on oil isn’t the only way to make Nigeria rich. We have seen talented artists in afrobeats from both here in the U.K and in Nigeria, making it on their own without government aid. Imagine what could happen if the government invested in the youth?

I would love to move back at some point in the future but It just seems as though the talented young people have grown tired and have left the country.

Seeing as it is almost 2015, what would you like to accomplish in the new year?

It might sound cliche, but I want to sort myself out and learn how to grow to become a responsible adult. In a sense, I’d like to grow up and mature a lot more.