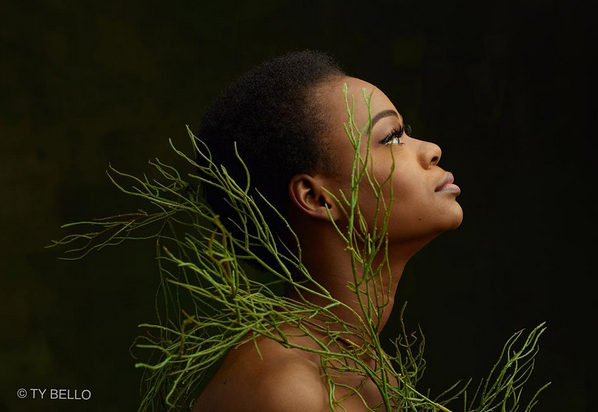 I never expected that this could ever happen to me. My friends told me they saw me on TV and Facebook and were really happy. My parents cannot believe their own child can become such a success. They are all so happy.

Stories such as these do not happen often, and if they do – are likened to fairy tales.

Photographed on the bustling streets of Lagos Nigeria, this was the infamous shot that propelled the unique story of time and chance for former bread seller turned model Olajumoke Orisaguna. The buzz surrounding the Former bread seller came after she inadvertently appeared in the background photograph of UK rapper, Tinie Tempah. Her brief- yet coincidental appearance in the shot however, did not stop Nigerian photographer and singer/songwriter Ty Bello (Toyin Sokefun-Bello) from noticing her poise and structure. Taking to Instagram, the photographer sought help from her followers in identifying the mysterious lady.

‘WHO IS SHE?,’ – said Bello, ‘Everyone has been asking if this lady is a model .. It was just perfect coincidence … She just happened to be walking by while I photographed. It happened so fast. She definitely SHOULD be a model. I’m happy to help her build a portfolio if she’s interested. She’s so beautiful and photographed so well. I’ll find a way to track her down somehow.’

As social media would have it, the mystery was solved after 27 year old and mother of two Olajumoke Orsaguna was uncovered as ‘That girl who photobombed Tinie.’ 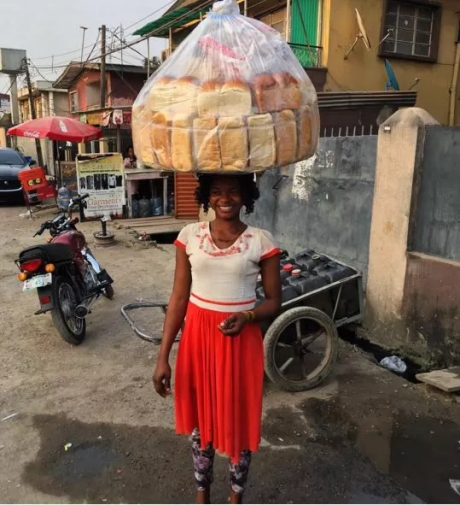 Narrating her story to Ty Bello, Olajumoke  told of how she began as a hair stylist from Ire in Osun state. As the occupation did not leave enough profit between herself and her husband, Jumoke began to seek other means of earning a living.  At the invitation of a distant relative who knew someone operating a bakery in Lagos, she deciphered to take on the role as a bread seller in order to take better care of her family. She intended to give bread hawking an initial try, temporarily  leaving behind her husband with their 5 year old son.

On discovering her new found fame, a teary-eyed Jumoke said she never expected her fortunes to turn around like this. “I never expected that this could ever happen to me. My friends told me they saw me on TV and Facebook. They are really happy. My parents cannot believe their own child can become such a success. They are all so happy,” she said.

So far, Jumoke has recently graced the runway, secured her first modelling contract with Few Models Management Nigeria, is brand ambassador  for PayPorte and now  the face of local bank Stanbic IBTC. In addition to her contract, the mother of two was also reported to have been offered a luxury apartment for herself and her family.

On instagram, Tinie Tempah  welcomed this news with excitement adding,

‘ #WCW #Olajumoke This woman went from Photobombing my photo shoot in Lagos for @thisdaystyle to landing her own Modelling contract! She went from selling that bread to getting that bread real quick lol! So happy for her, she is most definitely blessed and this goes to show that ANYTHING can happen you just have to be at the right place at the right time. Hopefully this beginning of great things for her .’

Fans of the rapper/songwriter jokingly responded by asking for details on the whereabouts his next photo shoot, whilst others suggested Jumoke’s story would now see the majority of Nigerian girls selling bread and looking for their very own Ty Bello.

While concerns have been raised that her new found fame could be exploited, we are certain Jumoke’s story ignites feelings of hope, compassion and inspiration amongst fellow Nigerians and of those in the diaspora. We wish her the very best of luck!

What are your thoughts?