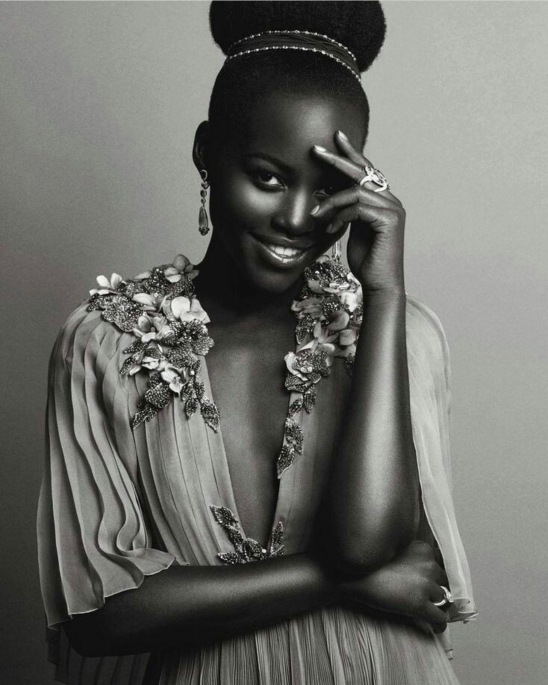 Lupita Nyong’o captivated a global audience after her outstanding performance in Steve McQueen’s ‘12 years A Slave’ movie. Her stunning talent displayed by her supporting role as Patsey – a slave who works alongside Solomon Northup at a Louisiana cotton plantation drew so many rave reviews, earning her The Golden Globe Award for Best Supporting Actress, a BAFTA award and two Screen Actors Guild Awards.

Carrying herself with such grace, poise and modesty, Lupita Nyong’o raises the bar for fellow black and African actresses in her field. Her aura and the talent she brought to the big screen were such that immediately after witnessing her performance, the question on viewer’s lips was, “Who is she?”

Inquisitive minds unsurprisingly took to social media – determined to know more about this new ‘Melanin Queen.’ She separated herself from the usual and Hollywood did not expect it.

Unashamedly proud of her Kenyan roots, Lupita was actually born in Mexico, making her Mexican. However, do not think for a second her parents allowed her to forget her roots. On the contrary, she comes from a family that’s very African at its core.

She talks fondly of what it was like to tell her over achieving parents (Her dad is a well-known Kenyan Politician and her mum is MD of the African Cancer Foundation) about her dream of acting. Those of you reading this that grew up with your typical African Parent(s) can probably imagine how that conversation went down right after: “Mum, dad, I want to attend an American Ivy League University to study… Acting”.

Luckily for Lupita, her first role combined with hard work and raw talent landed her an Oscar – right after graduating from Yale.

No doubt, Lupita comes from a legacy of excellence and she does all she can to embody that excellence in her work as well as projects she chooses to participate in.

Four years on, we look back at one of her early interviews with Krista Smith for Vanity Fair Magazine back in 2013:

VF: You were born in Mexico but raised in Kenya. Tell me about that…

Lupita Nyong’o: Yeah, so my father was a professor of political science and also a young politician fighting for democracy in Kenya, and when things got ugly, he went into political exile in Mexico. Then I moved back to Kenya shortly after I turned one grew up in Kenya. I spent some time back in Mexico at 16 because my parents thought it would be prudent for me to learn Spanish. After all, I held a Mexican passport – so that was a formative time. Following that, I came to the U.S. for school. I went to Hampshire College where I studied African and film studies. Eventually I made my way to Yale for a Masters in Acting.

VF: Especially with your background, I can imagine it wasn’t the easiest thing to tell your parents that you want to be an actress.

Lupita Nyong’o: My immediate family was always very supportive. It was my own fear of the rest of the world not accepting me, the rest of our society not accepting my wish to be an actor that made me nervous. I remember people saying to me, “I hope you grow out of this and get a real [job], do something real. A real profession. Like be a teacher or a businesswoman or a lawyer or a doctor. That’s what people do. They do their jobs.”

VF: How did it feel to get into Patsey, a character who is so well realized onscreen, and then to be normal at the end of the day when they say “Cut” and go back to Lupita.

Lupita Nyong’o: There’s absolutely no way I could have done Patsey without my training at Yale. At Yale, it’s like athletics of the heart. On any given day I was working on three to five different characters. It helped me in I suppose, an emotional efficiency. That said, it was very difficult to be Patsey, and it was very difficult to leave her alone at the end of the day. I don’t think it was ever possible for me to leave her completely on the set. And so always remembering that this was true for someone, and I have the privilege of just doing it in an imaginary world . . . That was a thing that just made it practical.

Lupita has since had roles on stage and on screen, including Disney’s Queen of Katwe, Star Wars and Jungle Book. We are looking forward to seeing her play Nakia in Marvel’s Black Panther February next year; and maybe, just maybe star alongside Rhianna in potentially (thanks to Twitter), the most incredibly awesome villan-sidekick film ever – written by Issa Rae and directed by Ava DuVernay.